There are 6000 homeless youth in LA 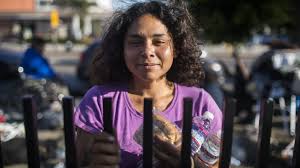 Maggie Reyes was hanging out with a group of homeless people at a makeshift encampment in front of Tommy’s Burgers on Hollywood Boulevard. The spot, near the 101 off-ramp, is a good place to panhandle.

“Some of us are out here because we don’t have a choice,” said Reyes. “Our parents treated us really bad and we ended up in foster care and foster parents aren’t that nice either. So you know, a lot of us ran away.”

Reyes, who is 24, is one of the nearly 6000 homeless youth in Los Angeles County, a number that’s 61 percent higher than last year.

In part, the spike in youth homelessness can be attributed to better counting. However, a bigger reason is that young people simply can’t afford to live in LA, according to Bill Bedrossian of Covenant House California, a youth homeless services agency.

“Where they used to be able to live on the margins and bunk up with friends and split the rent, now it’s just so high, that, even in that case, if they’re not making significantly more than minimum wage, they’re not able to live,” said Bedrossian.

Service providers in Los Angeles say that, more and more, homeless youth are coming from impoverished families who don’t have the resources to help, even if they want to.

This was the case for Leo Serrano, an 18-year-old community college student, who found help at Jovenes Inc., an organization in Boyle Heights that serves homeless youth. Serrano, whose parents live in Mexico, was staying at his grandmother’s house, but when she faced eviction for having too many people under one roof, he was forced out.

Before finding Jovenes, Serrano said he was staying at a temporary shelter, while going to school and holding down a part time job. “ [It was] really, really hard, because when you left the shelter, you had to bring all your stuff with you. So, you can just imagine going from South LA all the way to downtown LA with all my stuff in a duffel bag and a backpack and a bike.”

Eric Hubbard, development director at Jovenes, said the answer is in affordable housing. With that goal in mind, Jovenes recently bought several houses in East LA, so the organization can rent out rooms for $500 dollars a month to youth in need. Fifty dollars of the rent received will go into a savings account for that young person.

Hubbard said despite the challenges, it’s important to reach the younger population, because they can be set on a course out of homelessness and still can aspire towards big goals.

“They come from so many different backgrounds and so many experiences, but we have a common goal for them, and that’s to increase their own self sufficiency, their independence, move into their own apartment, get jobs and live a normal life,” said Hubbard.