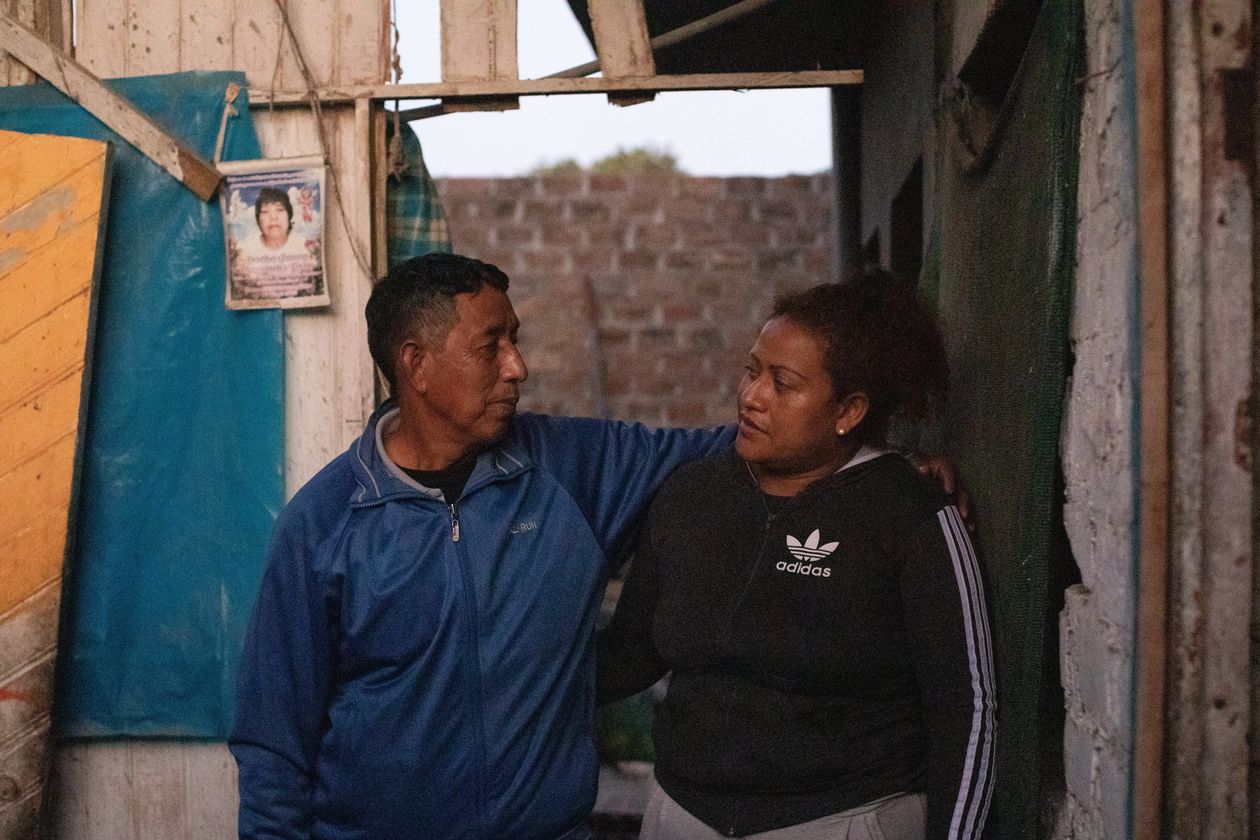 PISCO, Peru—Several nights a week, 4-year-old Sofia Felices jolts awake in tears and calls out for her mother, who used to cuddle her youngest daughter in bed. Sofia’s mom died from the coronavirus in April, so that job now falls to the girl’s great-aunt, Janette Navarro.

“She cries and she cries,” said Ms. Navarro, who has three children of her own but has become caregiver to her niece’s five children in this coastal fishing city. “She screams with her eyes closed, ‘I want my mommy. I want my mommy.’ ”

A year and a half into the Covid-19 pandemic, contagious variants have been killing many in the prime of parenthood, a group that remains mostly unvaccinated in many parts of the world. From March 2020 to April 2021, an estimated 1.1 million children lost a primary caregiver to the virus, according to a recent study in the medical journal the Lancet.

Many of the most affected countries are in Latin America, which accounts for about one-third of coronavirus deaths despite having just 8% of the global population. On a per capita basis, Peru has been the hardest hit, with an estimated 10.2 children per 1,000 losing a primary caregiver, according to the study published in the Lancet. Mexico, Brazil and Colombia also are in the study’s top five.

On Thursday, Mexico’s agency for child welfare published a study estimating 118,362 children in Mexico lost at least one parent.

Public-health experts predict lasting consequences for children orphaned by the loss of both parents, as well as for those who have lost one, including greater risks of mental-health problems, poverty and abuse. They say the plight of such families has been largely overlooked by governments still struggling to beat back a virus that, at least early on, mainly killed the elderly.

“The velocity at which this is happening is staggering,” said Andrés Villaveces, a physician and epidemiologist at the U.S. Centers for Disease Control and Prevention who co-wrote the Lancet study. “It is a problem that affects every single part of the world, and it is a problem that lingers. If you become an orphan at an early age, you are going to be vulnerable for many years.”

In India, more than 75,000 children lost either one or both parents to Covid-19 between April 2020 and July, according to the National Commission for Protection of Child Rights. The state of Maharashtra, home to financial hub Mumbai, had more than 13,000 children affected, the organization said in an affidavit to the Supreme Court.

In the Brazilian community of Purupuru, located about three hours by road and ferry from the jungle city of Manaus, the virus has upended the life of 64-year-old Maria Alice Gentil. Her daughter Cristina, a 45-year-old single mother who lived in Manaus, was struggling to make ends meet as a cleaning lady when she gave birth to her youngest this year.

Within days of returning home with her baby daughter, she developed a fever. She returned to the hospital, where doctors found that she had Covid. She spent the next two months intubated before she died.

Now Ms. Gentil, who was already raising two other grandchildren, is caring for the baby and her daughter’s two boys, ages 9 and 14. Ms. Gentil tires from trying to keep up with the baby, who cries to be held and is starting to crawl.

“Every day is a tremendous struggle,” she said.

Cristina’s oldest son, 14-year-old João Lenno, helps care for his baby sister when his grandmother is cooking or washing clothes. João and his brother, Jonathan, used to have a lot of free time in Manaus because their mother worked all week. Now, their grandmother needs them do chores, such as sweeping the floors.

João misses his life in Manaus and his mom. “At night, I enjoyed watching movies on TV with her,” he said. “I didn’t think [the virus] would come here to Brazil, to do all this damage.”

In Argentina, which ranked No. 8 in the study in the Lancet, Celina Rivas and Rodolfo Guevara, a couple from the northern town of Rawson, never had a chance to meet their infant daughter, Martina. In May, Ms. Rivas, 38, was looking forward to the birth of her fourth child when her breathing became labored. Seven-months pregnant, she checked into the hospital and tested positive for Covid.

After complications, doctors performed a caesarean section, then isolated Ms. Rivas from her premature baby, fearing the infant might also have the virus. Ms. Rivas was put on a ventilator. A month later, she died.

The day she was intubated, Mr. Guevara, 40, was at home gasping for breath, unable to find an available hospital bed in the city. His daughters, ages 20, 17 and 11, didn’t know what to do. They opened the window to give him some air and called a doctor, who arrived too late. “He died in my arms,” said the oldest daughter, Tamara Guevara. “We couldn’t do anything.”

Some countries are assisting the orphans and their new caregivers, who are suddenly saddled with the financial costs and emotional demands of raising the children.

Peru is providing cash transfers to children whose parents died from the virus, while India is giving assistance with tuition and admission to nearby schools, along with depositing about $13,000 per child into accounts that can be accessed between the ages of 18 and 23.

In Manaus, which was the center of the pandemic in Brazil, volunteers started a program to help Covid orphans by providing food and diapers to their new caregivers. Currently, 175 children and teenagers, many from poor households, receive assistance, said Glauce Galúcio, who launched the program.

Death from Covid-19 can be especially difficult for children to process because of the speed with which it kills.

Ryan and Ruan Lucatto landed with their aunt’s family in the Brazilian city of Jundiaí after their parents died within two weeks of each other.

Their aunt, Ellen Cristina de Sousa, rented a new house to make room for Ryan, 20, and Ruan, 11, as well as their two dogs. Ms. de Sousa is less picky about chores than the boys’ late mother, who was her older sister. But she insists the family, which includes her husband, daughter and mother, sit together for an early breakfast and a dinner at 6:30 p.m., which Ryan said his parents never did.

At night, Ms. de Sousa waits up for Ryan, taking time to talk with him before he goes to bed, as Ryan once did with his mother. She kisses Ruan on the head, like his mom used to do, rather than on the cheek.

“Thank God we have them,” Ryan said of his aunt and her family. “There are children and teenagers who ended up alone in the world.”

Ms. de Sousa, 37, had to leave several cleaning jobs to help care for Ruan, who is being tested for autism. His developmental issues worsened after his parents died. He became more anxious, his stutter grew worse, and he began blinking his eyes more often, his family says.

“I will do everything I can for them,” said Ms. de Sousa, who helps Ruan with schoolwork. “My mother often asked me if I was going to have another child. Now, God gave me two sons.”

In Peru, Ms. Navarro now has eight children to look after. The 39-year-old single mother grew worried when she stopped by her niece’s small brick house in April, seeing that the five children, ages 4 to 17, were essentially on their own.

She found her niece, 34-year-old Maricel, in a back room, struggling to breathe as she winced in pain and declined to eat. She shared the room with Ms. Navarro’s sister, the children’s grandmother, who lived in the same house and was infected with the virus, too.

The grandfather, Manuel Hernández, who nearly died from Covid last year, was busy attending to his wife and daughter as the family searched for medication to ease the symptoms. He put an oxygen cylinder between their beds, which the women shared. Ambulances took them to different hospitals. By then, their lungs were devastated. They died two days apart.

Ms. Navarro moved in to help out, while the grandfather returned to work at a fish factory to cover household bills. She now cooks breakfast, does the laundry and bathes the youngest children. At night, they talk. Before bed, they pray in front of a small altar, which has a photo of a smiling Maricel and a statue of baby Jesus.

“I’ve had to become their mom,” said Ms. Navarro, 39, noting that her 8-year-old son has become a bit jealous. “I try to support them, so they feel good.”

Maricel’s children are still coping with the grief. Sofia, the 4-year-old, has trouble sleeping. Eight-year-old Guiliana is afraid of the dark and cries as she remembers crawling into bed with her mother, who gave her hugs and kisses.

Guiliana said that when she is older, she will explain to her younger sister what happened to their mother. “We don’t want to tell her everything yet,” she said. “She’s still too young.”

Valeria, 12, liked playing cards with her mom before the pain from the virus became too much. “She told me she wanted to die,” recalled Valeria. “She told me to take care of my siblings.”

Maricel’s only son, 15-year-old Hugo, was always a bit rebellious, often arguing with his mother, his sisters said. After she died, he refused to listen to his great-aunt or grandfather. He left home to live with a friend.

Her oldest daughter, Creizy del Carmen, 17, recalls tucking her mother in at night after they watched Mexican telenovelas. She also was infected with Covid-19 but didn’t have symptoms. She is now studying to be a teacher, hoping to one day get a job that will help support her younger sisters. She never imagined both her mother and grandmother would die from the virus.